Whether you’re headed back to Hogwarts for a new school year full of adventure or in need or organizing your desk at MACUSA, you’ll need to equip yourself with some essentials only found in the Wizarding World.

Thank you Loot Crate for creating your boxes to be turned into something else. The trunk is great and works well with the rest of the box.

From the first time I took the house quiz on Pottermore and got Slytherin it’s always been the house I included myself in. Maybe I changed and the answer is different, but I do think I’d be a Slytherin. This scarf is soft and displays the house crest proudly. I don’t own a Harry Potter scarf and am really happy about this.

Also thanks to my lovely model for her help.

Wizarding World crate’s been sending pins for each Horcrux and this is next on the list. I like the detail within the pin and it’s a fairly large size.

When I opened the box and saw this little box inside I got pretty excited they sent chocolate. Even though it has no connection to the rest of the crate. I love the Honey Dukes box and will be using it for something else. 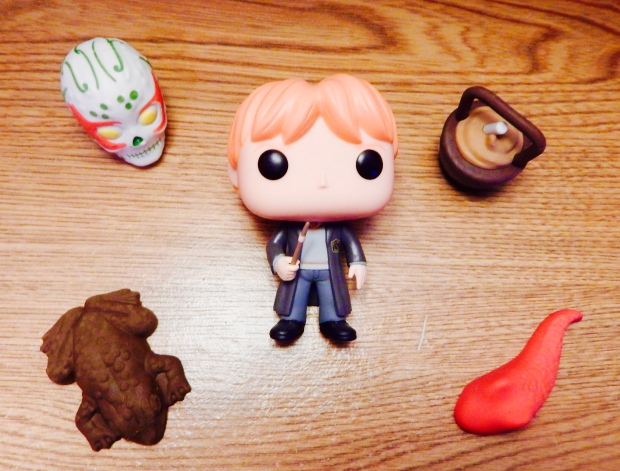 Erasers are cool too.

This is my fifth wand pen. Not from this box but in general. I can’t complain when I receive a pen that looks like a wand though, and I’ll add it to the collection.

A folder, sticky notes, list pad, and paper clips. I don’t need anymore stationary but I’ll take it. I love the sticky notes with the levels of danger and might use the paper clips as bookmarks.

I never complain about these crates. They give you something different instead of just Harry Potter apparel that most of us already own. I like the stationary set but the scarf most of all. The crate is shipped every other month with a different Harry Potter theme. It represents the series well and gives a variety of items. 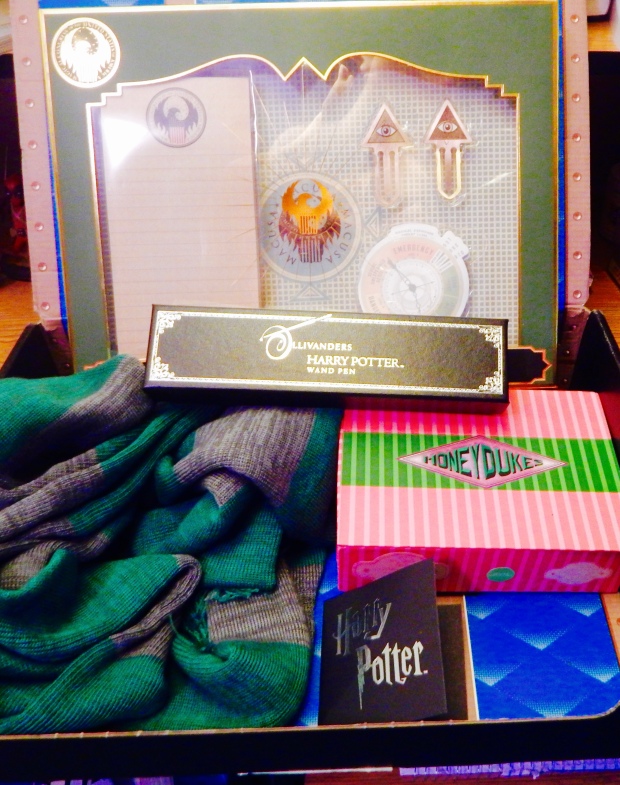 I found out about this tag from Jenny in Neverland. Check her out and feel free to do the tag as well!

Slytherin. It’s the first quiz I took on Pottermore and it’s what I stuck with since. However I do feel there’s a bit of Hufflepuff in me.

2. What is your Patronus?

A Rhinoceros, which I take great pride on.

“Beech wood with a dragon heartstring core, 12 ¾” directly from Pottemore.

4. What would your boggart be?

That’s actually tough. If there’s one that shows a future of me being stuck in my part-time job and not doing what I love for the rest of my life. I also have this fear of someone attacking me and me not being able to defend myself. Also Pennywise.

5. What position would you play in Quiddich?

Probably a keeper or chaser.

6. Would you be a pure-blood, half-blood or muggle born?

Based off my parents I’d say pure-blood, just because we’re all fans of the series.

7. What job would you want to have after leaving Hogwarts?

I’d love to take care of magical creatures or write books. Both.

8. Which of the Deathly Hallows would you choose?

I might say Goblet of Fire, but also Chamber of Secrets and Deathly Hallows.

Order of the Phoenix, but does Cursed Child count? I don’t count it but if you do then Cursed Child.

Order of the Phoenix. It just irritates me as no one believes Harry.

Hermione but Lupin and Luna are close behind.

I truly hate Umbridge, but Lucious is second.

Professor McGonagall, without a doubt, but Lupin would be up there as well.

17. Do you have any unpopular opinions about the series?

I’m not a fan of Snape, but I’m sure that’s not an unpopular opinion as most people changed their feelings over the years. I didn’t like movie-Ginny, but also not unpopular.