There are times when pretty much every teenager thinks his or her parents are evil — but what if it was actually true? Six teenagers, all with different backgrounds and abilities, must unite in order to defeat their common enemy: their parents.

I’ll admit when I first saw the trailer for this I immediately thought it’s another mutant series. I love the X-Men. It’s one of the earliest series I got into, but with so many adaptations recently I got worried I didn’t want to see another. Then I actually learned about Runaways and my interest peaked.

I should point out Hulu only released three episodes with new episodes on Tuesdays but let me tell yah: when I went to click on the next episode and it only said “sneak peek” my binging mode fell flat.

Long ago, more like two years ago, a group of teenagers used to be best friends. A tragedy hit and the group fell apart leading them to live their own lives, which are drastically different from the rest. Examples being Alex, a nerd/gamer who wants the group to get back together. Nico, a Wiccan whose sister died and presumably led to the group’s demise, and Gertrude (aka Gertz) a social justice warrior with awesome purple hair.

There’s Chase, an athlete jock who hangs out with jerks but also has a jerky dad, Karolina whose life is devoted to her mom’s church, and Molly…she’s adopted. Molly is going through some of the first changes in the show and that may have something to do with her recent step into adulthood (she got her period.) 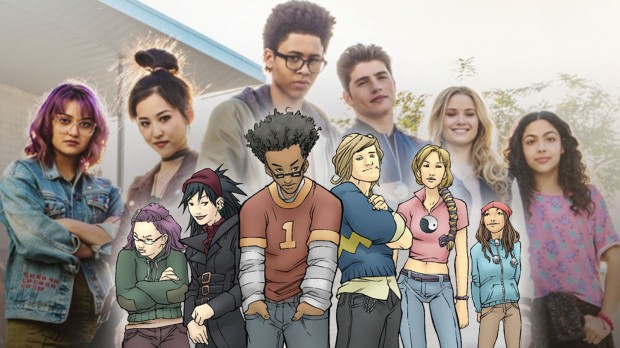 Growing up they hung out because their parents are all apart of a group called “Pride” masking as a charitable organization but is actually a cover for a criminal underground made up of aliens, witches, and time-travelers. Upon finding out about their parent’s actual going-ons the group forms back together in order to figure it all out while dealing with their own changes.

Getting the Band Back Together

Despite breaking up a while ago, when the group starts hanging out you can tell they have history and it doesn’t take long for them to get back into the routine of talking to one another. Alex and Nico’s chemistry makes us assume they were “something” or at least liked each other. Gertz gets on Chase’s ass for his jock status but you can tell she likes him. And he may like her back. And probably Karolina, who I’m going to assume is playing for a different field.

Meanwhile Molly is dealing with shit. What starts out as some nasty period cramps turns into glowing eyes and breaking doors. Molly has super strength but can’t seem to tell anyone? Or at least show them.

All of them work well together. You can tell they used to be friends but it’s also awkward since they don’t talk anymore. At first it’s a bit weird, but soon they get into the groove of their old ways. There are some kinks to work out: Gertz isn’t fond of Karolina’s religious life or her being around Chase.

I immediately thought, once they saw their parents doing some pretty evil shit, they would runaway…hence the title. Well that must be for later because for now they have to act like everything is normal. Each one discovers something is up with their parents while also discovering that something is up with them. You know stuff like passing down traits, interests…special abilities.

We don’t discover everyone’s special something yet, only a few by the end of the third episode. I don’t want to get into any spoilers but there may be a giant creature hiding in Gertz’s parent’s basement and is pretty awesome when you find out what it is.

Their parents are powerful people and if they’re not scared of them before, that changes quickly after finding out their secret. Everyone’s successful. Hell they’re all millionaires. And hiding a lot more secrets than I can seem to figure out.

This is going to be short because I rant about it a lot when it comes to anything: why must characters hide shit that’s going on with them? (And I don’t mean the parent’s hiding secrets.) I can understand at first being confused or thinking it’s a hallucination or whatever, but after repeatedly using super strength to destroy buildings you’d think Molly might speak up about it. Well she kind of does. She likes to use the phrase “changes.” It would be nice for her to do something instead of complain no one believes her about anything.

That’s all I have to say about that.

This show took me by surprise. I wasn’t expecting to like it as much as I do. All the characters are likable in their own way, even when they sometimes get on your nerves but they’re teenagers. We all did annoying shit back then. 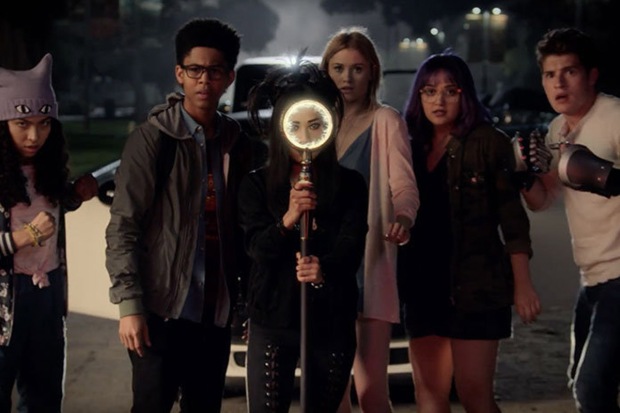 I’m excited to see where this goes as well as discovering the rest of the group’s abilities and what they decide to do about their parents. I know what the comic does but that doesn’t mean the show will follow.

If you have Hulu I highly recommend this show. It’s a lot of fun while uncovering mysteries, learning more about the characters, and rooting them on to save the world while not getting caught by their parents.