Fifteen years in the waiting, Hey Arnold fans finally get closure after Arnold discovered a map leading to his missing parents.

A few years ago I re-watched the entire show. Not only did I realize 1.) how well it held up 2.) how much I miss it and 3.) how we need to know what happened to Arnold’s parents. I remember thinking, no believing, they’re still alive and if that’s all I have to go on for the rest of my life so be it.

Then news came of this movie and I almost lost it. Afterwards it feels as if a weight’s been lifted. Questions have been answered. Life feels whole.

And it’s better than I expected.

Winning the trip of a lifetime to San Lorenzo in Central America where Arnold’s parents went missing is amazing yet suspiscious, but it doesn’t stop Arnold and Gerald from trying to win the contest. When things don’t go as planned Helga comes up with the plan to make a video all about Arnold, reliving some of the best Arnold moments from the original show, reminding us what a genuinely good person he is.

Needless to say they win and are on a plane before they know it but don’t know of the danger in the jungle known as La Sombra, who is out to get Arnold.

Fifteen years later we will discover what happened to Arnold’s parents, what he has to do with it all, and how he will react to Helga’s (second) confession of her love.

It’s hard not to compare this to the original show so instead of making this a long section I’ll just break it down to make it easier.

The design is more updated, colorful, and “fresh” but I didn’t mind it. There are flashbacks to the show where we get to see the original design. However there is a feel about it I miss, that we all probably will, but I appreciate how much work went into the design especially when we get into the jungle.

Despite not having the same voice actors for Arnold and Gerald, it’s still a close match. Or as close as we can get. As for everyone else they’re either the same or not as noticeable. Their designs are the same as well, but with a few changes in the outfits. Personalities and quirks come through for different characters whether it be Nadine’s love of bugs or Sid’s boots; they’re quick reminders of what we love about each of them, despite some not getting as much screen time.

And everyone makes an appearance at some point.

This is a small tidbit but the show is more “modern.” Cell phones and wifi are a thing, which is leaving Big Bob out of business. It’s nothing big and comes in handy later in the movie but just a bit of a change from the 90’s technology of the show.

Throw away everything from above and you’ll still have the same show we all loved. Arnold’s still that bold kid, Gerald is always there to back him up, Helga is slowly tearing herself down to Arnold and saves the day on more than one occasion. It doesn’t take long for you to get back into Hey Arnold like it never ended.

For a Nickelodeon movie it does get violent from time-to-time and not just in the accidental, “goofy” way. Lives are on the line. La Sombra puts a blade to Arnold’s throat. It goes there. Sure a lot is at stake and it doesn’t take long to realize how dangerous the whole mission is, or maybe the creators know 90% of the audience will be 20 years+. 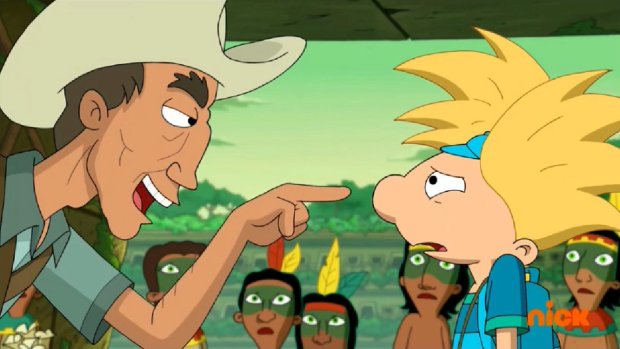 Not saying younger viewers can’t handle it. Nothing is grotesque but there’s the occasional stabbing and arrow piercing and stapler mutilation.

All major loose ends are tied, whether you wondered what Arnold’s last name is.

HINT: it’s already been said in the show COUNTLESS TIMES.

HINT: we all knew it.

What exactly caused Arnold’s parents to be missing for so long?

HINT: it makes sense when you discover it.

I’m beyond happy about the information we got plus more! Questions I didn’t even think to ask (i.e. Mr. Simmons.)

Based on what I read on Twitter, and since it trended #1 for quite some time, there is a high possibility of the show returning. All based on whether the movie would have good feedback and it appears to be a success.

I’ll be honest, I got worried maybe they’d overdo it with certain jokes or modernize it in a way the show didn’t need. When I saw Olga in trailer joining them I got worried she’d become “too much” but everyone gets their time and in a good way.

It’s funny. Old and new jokes work, especially when they feel authentic coming from the character. As successful as the movie is, it’s also a reassurance the show could come back and still get the views so long as there isn’t 60 commercial breaks during a two-hour period (it felt like it.) At the moment fan reaction could prove a return being very likely and I can’t wait to see where it goes.

Follow Quibbles and Scribbles on WordPress.com
Join 2,278 other followers

Three years and a 2 1/2 trip later to the Virginia Farm Market for my main goal of getting cherry cidar 🍒
Another recent crochet of mine. One of the hardest I've ever done but I'm proud 😊🎸
As a casual crocheter, I don't do amigurumi often but I think this one turned out to be a success 🙂
One minute Jinx is playing with the bag, the next 😄
My work desk is right next to the windows and the amount of "chirping" they do early in the morning when they see birds 😄🐈‍⬛
Source: Pinterest
Advertisements
Loading Comments...
%d bloggers like this: