Rae just wants to listen to music and make friends but hiding her time in a psychiatric hospital isn’t as easy.

After the second series of My Mad Fat Diary aired I saw constant quotes on numerous sites which peaked my interest. It’s embarrassing to say how much I enjoyed the show yet didn’t finish the final three episodes until a few days ago. I like to think it comes into my life when I need it most.

My Mad Fat Diary is sixteen episodes in total that you can  watch on Hulu…or Youtube.

Side note: this show is about mental health and deals with self-harm, depression, body issues, and suicide just to name a few, which I will be talking about a bit.

I don’t want to talk about another show that currently is talking about suicide and my…dislike for it, but if you want real talk about mental health this is the show to turn to.

Rachel “Rae” Earl is a sixteen year old girl living in Stamford, Lincolnshire in the mid-90’s. She loves music and is open about her sexual desires. At the start of the show she is also leaving a psychiatric hospital for harming herself. On her way home she runs into her good friend Chloe and her group of friends that Rae immediately wants to be a part of. 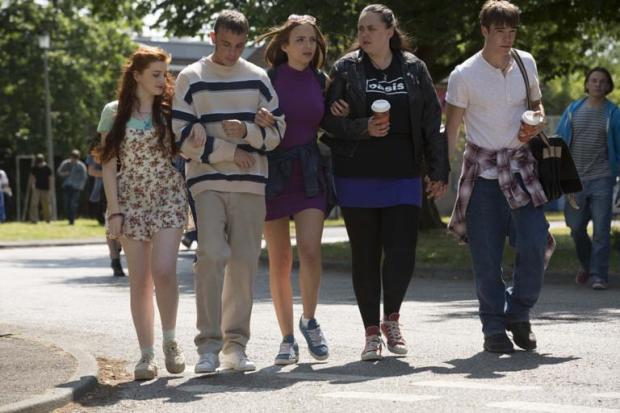 She takes an immediate interest in Archie, whom she discovers is gay and is dealing with homophobia. There’s also Finn, Rae’s love interest throughout the show, Izzy who may be a bit “ditzy” but good-hearted, and Izzy’s boyfriend Chop. Not wanting to scare them away Rae decides not to tell them where she’s been (her story is France) and lets her feelings loose in her diary and to her therapist, Kester. But as you can imagine things don’t go the way Rae wants them to.

We’re All Messed Up

Recovery isn’t perfect and Rae learns that quick. She has relapses, breaks down, and wants everyone to think everything is fine. When Rae opens up to Kester, their scenes are some of the best in the show. 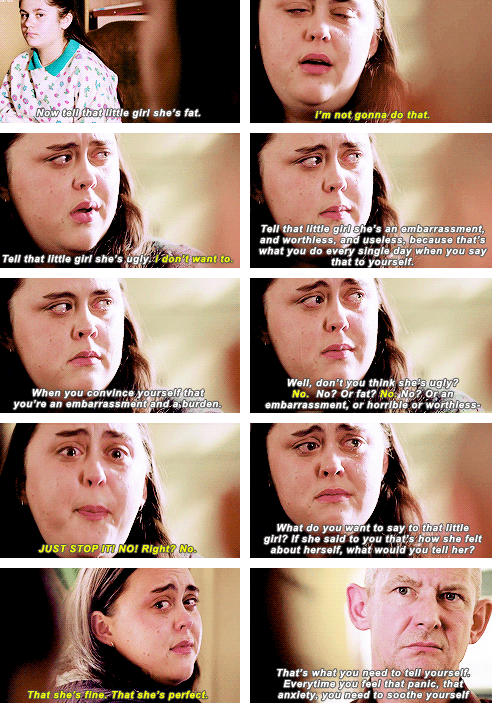 As someone with pretty bad body issues I understand Rae perfectly when she describes how she feels about herself. In some way, at some point, almost everyone could relate to a topic being addressed in the show. It’s not just the “dark stuff” but trying to fit in and make friends, pretending to be something you’re not, or even fighting with your mom about staying out.

One of the strongest elements of the show is Rae and her relationship with her friends or “the gang.” Although they’ve been friends for years, Rae and Chloe have their rocky moments but during some of Rae’s bad moments Chloe is there. To be honest, next to Rae, Chloe has some of the best character development in the show. Towards the last series she became one of my favorite characters.

Then there’s Finn. Ah, Finn. I liked them a lot in the beginning. Finn never cared about Rae’s weight, but liked her for her. Rae just wouldn’t believe he’d ever be attracted to her, no matter how much he admits it. This goes back to Rae believing she’s ugly and fat and how infuriating those thoughts can be.

Rae has a special relationship with all of her friends in different ways. It’s the little things like Chop calling Rae “Raimundo” or her friends from the hospital who can understand her in a way the others can’t.

Finding The Good In The Bad

Just because the show handles serious topics doesn’t mean there isn’t a sense of humor behind it. It can be dirty but it’s not out of character or feels forced. There’s usually something to laugh about when the gang gets together.

I try to keep my blog “family friendly” but this is one of my favorite quotes of the show.

I can’t say enough how relatable My Mad Fat Diary is. These are supposed to be real teenagers dealing with real issues like homophobia, bullying, and self-consciousness but can handle the tough topics like suicide and self-harm in a real way.

My Mad Fat Diary does have swearing and sexual moments if you need to know that.

Rae’s journey is one of the best. From absolutely hating herself to seeing her own self-worth is inspiring to those dealing with similar mental health issues. Even if you’re going through something different it’s great to watch someone grow and become stronger.

At first Rae didn’t think she’d be able to get through anything without her friends or Kester, but everything she’s learned up to the end of the show taught her how to do just that. Rae learned how to save herself and if you want to see her journey I highly recommend My Mad Fat Diary.