It’s 1958 Manhattan and Miriam “Midge” Maisel has everything she’s ever wanted – the perfect husband, kids, and Upper West Side apartment. But we know that can’t last forever.

Thank goodness I finished this in time for season two because I don’t think I could wait a year. I can’t say this was on the top of my “To Be Watched” list and to be honest I think the Emmys got me more interested, so here I am, eight hours later. The binge was worth it.

Miriam “Midge” Maisel has it all going for her with a practically perfect life and stands by her husband, Joel, as he works and attempts stand-up at night. She takes notes, helps him come up with jokes, and is always put together for him. But all it takes is one night for all of the shit to hit the fan.

After Midge discovers Joel’s not only been having an affair with his secretary but wants to leave because he’s not happy, she gets a bit drunk, goes to a club, and flashes the audience.

Well, before that she cracks everyone up with her jokes.

From then on out Midge starts a secret life of becoming a comedian while trying to seem like she has it all together despite Joel leaving. With her parents, Abe and Rose, who are very protective and urge her to get back with him, nothing will be easy for her.

A Hit Or Miss

I think it’s agreeable that one of the hardest things to watch is someone bombing while doing stand-up and it’s not any different here. After a worker in the club, Suzie, sees Midge’s act she immediately wants to become a team and Midge’s manager. Suzie is blunt but thinks Midge could make it. Being firsts in both their aspiring professions means things aren’t always going to be perfect.

It’s so much fun watching Midge hit it that when she misses, it’s hard to watch. I love it, but at the same time, the cringe is there.

But Midge is willing to put in the work. She starts to watch and listen to other comics, as well as befriending one of the best comics out there, Lenny Bruce. Honestly, Lenny deserved more screen time. I loved the chemistry with him and Midge and got a bit too optimistic about their potential relationship.

And speaking of relationships…

Midge has so much potential, but her family doesn’t seem to see it. Her dad, Abe, is one of my favorite characters. After a while, I think he starts to see his daughter changing and approves, but her mom Rose wants the best for Midge. And to her, the best means Midge and Joel getting back together. They care so much they don’t really allow her to make her own decisions or mistakes.

Then there’s Joel…I have mixed feelings for Joel. Throughout the season he goes through his own ups and downs, something I can usually get on board with, but after you discover he’s been having an affair, it goes away. For me. Of course, he has redeeming moments, but I also thought he held Midge back from becoming something more. 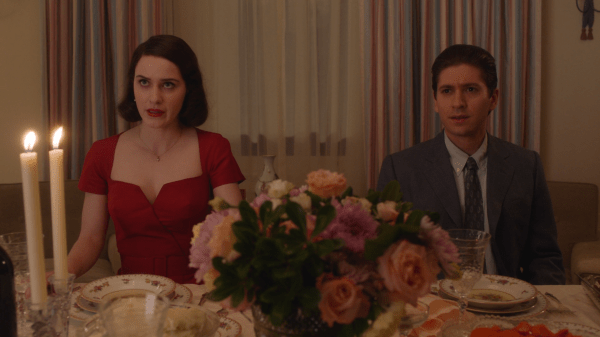 Oh, and Midge has kids. They don’t play a HUGE part since they’re still young. She usually drops them off at her parents or a babysitter and goes out and plays some gigs. Hell, even Midge herself wondered if she should’ve been a mother.

Being set in the 50’s doesn’t mean this is going to be easy for Midge since she’s a woman and most don’t see her as a comic. Then there’s the pressure for her to be a housewife and be there for her husband. Watching her grow into something more is one of my favorite parts of the show.

Now that’s not saying overnight Midge became this way. She was always fun and quirky with a sense of humor, unfortunately, it was hidden behind her husband and expectations.

Overall, if you want to watch a show with a woman defying the odds during a time that says she shouldn’t do what she’s trying to do, or just watch a show that’ll make you laugh, I highly recommend The Marvelous Mrs. Maisel.

If you watched The Marvelous Mrs. Maisel, what did you think?