We finally learn why Michonne and Daryl have X’s on their backs.

It’s another one of those instances when I decided to recap an episode out of the blue because I wanted to talk about it. I’ve waited for this one the most because Michonne is one of my favorite characters and to see how much she changed after the time jump annoyed me, so now that we have the backstory, I can start to understand.

And of course, spoilers.

This episode flips between the past and present: what’s happening in Alexandria today correlating with what happened after Rick died. Sometimes these episodes can be confusing or jump too often, but I think it was done well and it helps that Michonne was 1.) still pregnant and 2.) hadn’t shaved the side of her head yet. 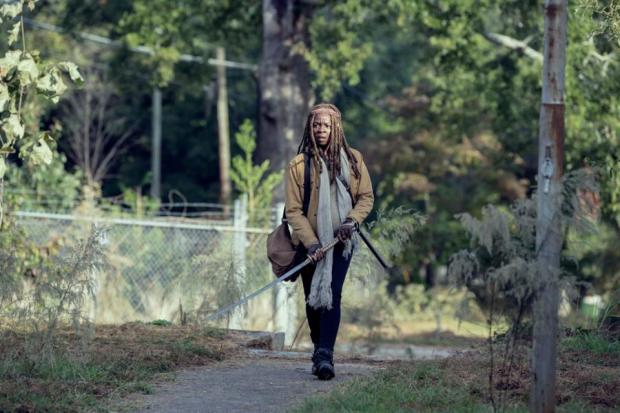 Months after Rick “died” Michonne and Daryl still looked for him, but only found his gun. Daryl even followed the river to the ocean.

In the present Daryl, Connie, Henry, Lydia, and Dog show up at Alexandria’s gates for help with Henry’s wound. It doesn’t focus too much on them, but seeing Henry get his leg stitched up, and it’s a gaping wound, by the way, so I can only imagine Lydia poking at it like Carl’s eye in the comic.

Just wanted to get that out before I continue.

In the past, Scott and Rosita arrive at Alexandria with a group of people they found, some hurt. Michonne recognizes the woman, Jocelyne, who she went to school with and hasn’t seen in 15 years. Jocelyne needs to get to the rest of her group where they are staying, which is all kids. We see posters hanging up of how to drain and skin a deer and rabbit and it doesn’t hit me until a little later on those posters are definitely foreshadowing something.

Back in Alexandria, Michonne and Jocelyne are reconnecting and Michonne talks about trying to find Rick. Jocelyne tells her to keep trying and for a while, things seem fine. Michonne even lets Judith stay overnight with the rest of the kids, but when she and the other parents go to pick them up, everyone is gone and the pantry’s been raided.

I should also mention the grate in the ground that leads to the tunnels. In the past, it’s a regular grate but in the present, it’s sealed up.

“To save my people, I’ve had to risk others.”

In the present, Michonne talks to Lydia about what’s she done in the past to keep her people safe but wishes she could’ve risked herself, which would’ve been easier. Basically, she tells her she needs to leave so the Whisperers don’t come after the communities.

Daryl and Judith have a talk and Judith says they can win, just like they did with the Saviors. Daryl says she doesn’t know everything but of course, she does because no surprise, Negan told her. Judith asks him what her dad would do about the Whisperers and Daryl doesn’t reply, but Judith wants to help somehow.

That night at dinner Judith doesn’t want to eat and goes to her room. Michonne gets up and tries to talk to her through the door which we know always means the other person isn’t the room and surprise, Judith isn’t in the room.

Michonne goes to Negan to ask if Judith’s been there and what they talk about. Negan says he told her all about the war and her family.

Negan also reminds Michonne Judith is HER daughter, which means she’s not going lay around and Michonne runs back to the box where she keeps Rick’s gun. It’s gone and Judith left a note saying she can’t just sit around while their friends need help.

The past and present are similar, Michonne looking for Judith, but in the past, Daryl helps her follow the tunnels to a school. Michonne wishes she would’ve seen pass Jocelyne and the kids and Daryl is there to reassure her Jocelyne fooled everyone. It’s a nice moment that’s about to be swept away by what’s to come.

They arrive at the school and are knocked out, taken, and hung up. Jocelyne tells Michonne the kids can’t be weak and need to survive (she reminded me a lot of Alpa during this scene.) She also told Michonne earlier that there weren’t any adults in their group because they “broke.” I’m sure the Children of the Corn did something, but it was never confirmed.

As they’re hanging up, like the animals on their posters, Michonne and Daryl are branded with X’s on their backs.

After some time, Daryl manages to get out. They split up to find the kids and Michonne runs into a group of them. She fights them off with a pipe but when one slashes her stomach, that’s it.

She meets Jocelyn outside and manages to grab her sword and kill her before she’s hurt too bad, but that leaves the Children of the Corn in between her and Judith and the other kids from Alexandria. And these kids are prepared to kill Judith. And we know, Michonne won’t let that happen.

In the present, Michonne fights off walkers to find Judith.

In the past, Michonne fights off the kids to save Judith.

And, as if it wasn’t obvious, Michonne has to kill the kids. (But I wanted to point out we never see any of it happen, just the aftermath.) 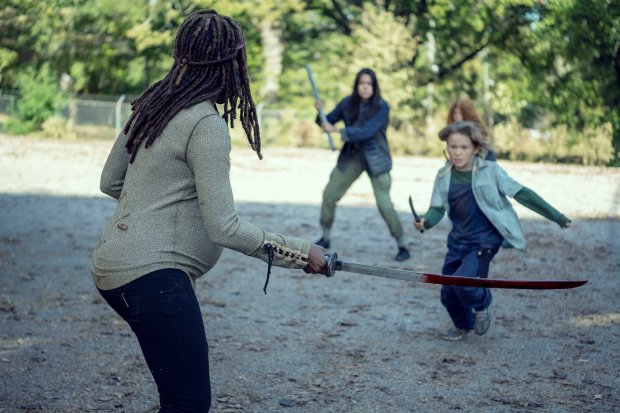 One of the kids runs away and thankfully, all of the Alexandria kids are fine. At first, Judith doesn’t run to Michonne and stares at her covered in blood with dead kids lying around, but eventually, she does and Daryl (who has been MIA the whole time) comes out to see what happened.

In the present, Judith is there fighting walkers with Michonne, like she doesn’t need help, but I like when one grabbed Judith’s shirt and she called for her mom.

“When did we stop loving our friends?”

Judith and Michonne have a talk in the present and Michonne tells her about what happened and how scared she was that Judith didn’t want to be with her after Jocelyne took her. Judith remembers it all and tells Michonne she didn’t recognize her with all the blood but eventually did. Basically, Judith’s seen some shit.

They have a talk and Judith says they love and care about each other, but wants to know why they stopped loving their friends?

At Carl’s grave, Michonne tells her how lost she was after Rick was gone, and when she lost her, she was even more scared. She just wanted to keep Judith and RJ safe, but now they have to help their friends. Michonne and Judith head to the fair and pick up Daryl and his group along the way.

However, before the episode ends, two Whisperers find the Kingdom.

As dark as that episode was, it was still one of my favorites of the season. I half-joked, before Michonne killed the kids and didn’t want to, that she should talk to Carol about it, but in a serious way too. I’m not sure if the other communities know what happened, but it seems like they don’t.

She did what needed to be done. Jocelyne raised those kids to kill and they weren’t going to listen to any reason.

I liked seeing Daryl and Judith talk, even though it wasn’t very long and I hope Michonne can start to see something in Negan so she doesn’t just assume he’s a bad person who wants to toy with Judith. He actually seemed concerned when he realized Judith ran away.

And, I’m so glad to see Michonne like herself again and wanting to help others.

Next week is going to be a tough one. Everyone knows (well, except me because I thought it was going to happen in the last episode) of the “loss” that’s to come, but at the moment, I plan to recap the remaining episodes of the season.