I made it my goal years ago to see Queen at some point in my life.

Meagan’s going to mention this for the 100th time, but I grew up listening to Queen. When I played sports, I had to listen to “Another One Bites the Dust” before each game.

Then there’s Adam Lambert (whom I share a last name with and people in my high school thought we were related) who I’ve been a fan of since he was on American Idol. I was so PISSED when he lost (good thing he did.) It was actually the last season my family watched.

And together is such a fun show to watch.

This isn’t really a review, but I will talk about some of my favorite parts of the show. Also, apologies in advance if the pictures aren’t great quality. My phone is pretty new and I’m not used to all the features yet.

You can also check out my review for the movie Bohemian Rhapsody.

A fun fact confirmed by Brian May: Queen hasn’t been to Pittsburgh in 40 years. 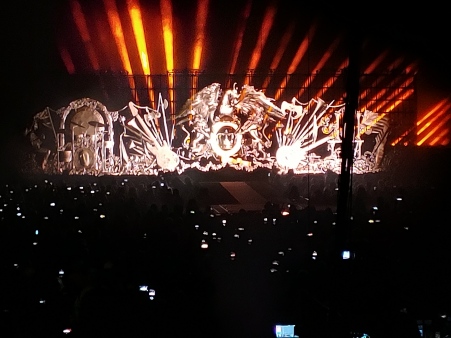 My mom and I got there an hour early…and had to wait outside until 730 to get into the building solely because of the security check. That part was a mess but after that, we got to our seats quickly and I wanted to take the time to get a shirt before the show started at 8.

And just like the security check, it was a mess. There were numerous stands set up throughout the arena and all were packed. I stood in one place for 15 minutes, not moving. Eventually, I said screw it and left because I didn’t want to miss anything and I needed water. 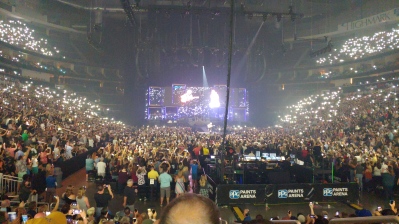 To sum it up: it was amazing. Obviously, the crowd went nuts when Brian May and Roger Taylor walked out, but any time Freddie Mercury was mentioned or shown on the screen, it somehow got louder.

Adam Lambert sounds awesome live. He’s a great performer and I can see why they’ve been touring together for eight years. And I won’t compare him to Freddie because he’s not trying to be Freddie. He channels him but the show is about and for, Freddie.

However, I would see Adam again, even after he’s done touring with Queen. 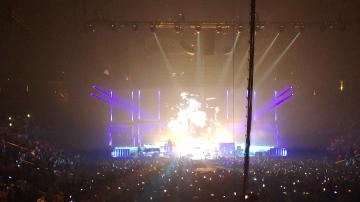 One of my favorite aspects of the show is when it slowed down a bit either for an outfit change or just to give them a break, and they immediately picked back up with an energetic song. The lights and lasers and effects changed constantly and I wanted to get a picture of everything.

I would easily see them again. The tickets are worth it (and they were about $140 each with taxes and insurance), we had seats in the stands so didn’t have to stand the whole time like sitting on the floor but could easily see them on stage, and standing in line for 40+ minutes for a shirt for myself and a bag for my mom, was worth it. Even if it was $75 for both. And I wanted a hoodie but it was $85.

This was my first big concert and I loved it. I went to some in college for smaller bands, but I hope this is the start of going to more shows.

Just a reminder 🌸💜
I got tattoo number 7 today. I wanted to get one for my aunt after she passed away and added flowers for my grandparents with the rose and mom and sister with the tiger lily. I love how it turned out.
Don't let that face fool you...she steals cat toys 🐶
Is this my new favorite picture ever? Thank you so much @artbyniu for drawing my Animal Crossing self with my favorite character, Ozzy. I LOVE it 🐨❤
My shortest Sims 4 review ever is up on the blog for The Paranormal Stuff Pack. I gave my sister a mullet 👻
I can never get a good picture of the moon but it looked super cool this morning 🌕🌌
Advertisements
Loading Comments...
Comment
×
%d bloggers like this: