Not really, but clones are mentioned a lot. If you’re one of those intensely waiting for the Shiro-clone theory to be put to rest, it finally is.

This may be one of my favorite seasons yet. From questions finally being answered to Voltron getting more screen time and less of the side-villain gang I was super pleased with the season as a whole.

I said it in my last season’s review and I’ll say it again: I could not for the life of me figure out if Lotor’s plan would be, well, good. Or something the audience could root for and agree with. Did he plan on backstabbing Allura? Does he really want peace in the Universe? If you asked me at the beginning of the season, I hoped for the good. I find Lotor to be an interesting character and a good “antagonist,” depending on how you view him. 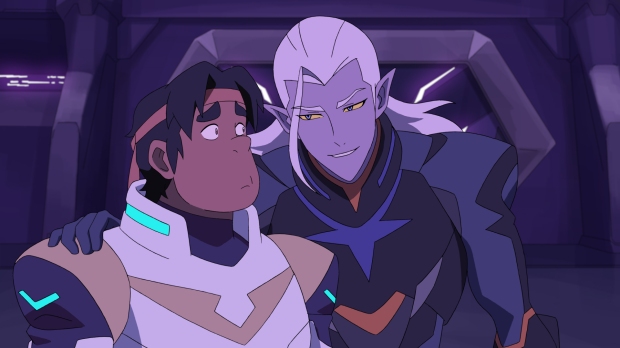 Not only is the answer given but we learn what he was up to while Allura slept. He wasn’t just sitting on the sidelines watching his father destroy planets and families.

What I can say is I understand Lotor’s intentions, but whether he goes about it in the right way you’ll have to find out.

With more Keith, the show started to feel like itself again. (I’m sure it may have to do with Stephen Yeun and his schedule.) At the end of last season, Keith just happened to run into his mom. The reveal of her history with his dad and what happened that caused her to leave is pretty awesome to watch. 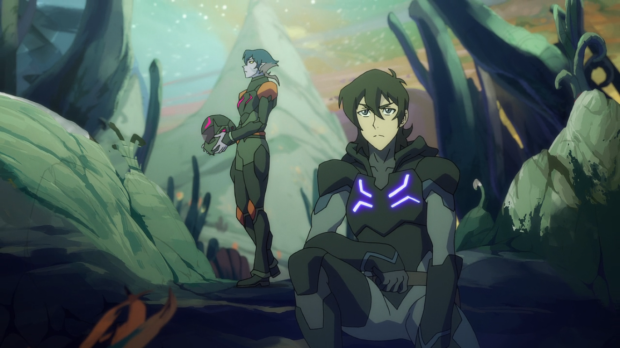 The two end up investigating an area where time is a bit messed up and within the span of years (yes years) they see each other’s pasts and learn about one another without just a lot of dialogue.

Giving Lotor some credit, he managed to bring the Galra and Voltron together. Granted not all Galra are happy with this but watching them work together is a bit…weird. Through Hunk we learn more about the Galra’s past as he goes through some intense history lessons. Actually, Hunk’s character grew as he showed what kind of leader he can be and his skills are put to use.

However, the Galra isn’t the main issue this season. Most of it is focused on the group, Lotor, and even Haggar whose starting to remember more of her past.

Voltron is still strong, but with Lotor and Allura getting much, much closer one member of Voltron doesn’t particularly like it: Lance. It’s always been obvious Lance had a crush on Allura, one of those small things he sometimes brings up, but it becomes much more prominent once he notices Allura’s feelings towards someone he doesn’t trust. It feels different this season and I think it’s Lance realizing how serious he feels about her. 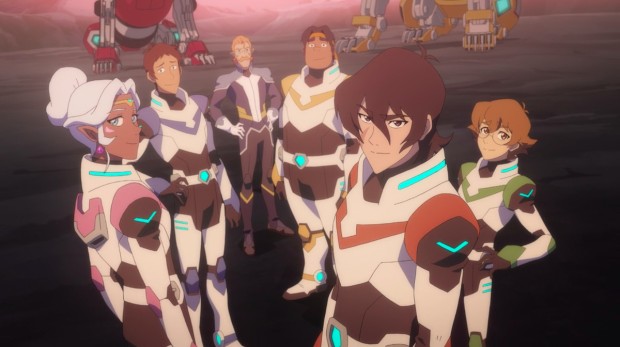 Everyone versus Shiro is another. Throughout the season he slowly starts to lose it and just shakes it off as nothing until it gets in the way of serious situations. It wasn’t until Keith came back that everyone realized, “oh shit, something’s wrong with Shiro.” We also get more of Shiro and Keith’s past and Shiro being like a big brother to him.

Did I mention there’s more Coran? I love Coran and felt the last few seasons he sat more on the back burner but this time around he got to do a lot more and show his smarts.

One of my favorite episodes is “Monsters and Mana” which is essentially Dungeons and Dragons. We actually go into the game and the characters act like the ones they are playing. It’s more of a filler episode while bonding Voltron more, but it was a nice break from the constant Lotor/Galra/Voltron issues.

I’m glad a lot of questions got answered and the story really moved along. When the season ended I felt like the storyline wasn’t being dragged out. Next season will be a big change-up that I’m excited for.

If you’re like me and wanted more of Voltron and less of Lotor and his side-gang then you’ll be happy with this season.

What did you think of Voltron season six?